Today, I experienced a ‘Wapple.’ A wapple, according to my 4-year-old daughter, is when you go to the park and play with someone you’ve never met before.

‘I love wapples mum’, she said after I’d coaxed her off the swing with the promise of an ice lolly.

‘Yes, I love wapples too. They’re the best. Now, Orange or lemonade flavour?’

She amazes me sometimes. Not only had she made up the word, but she’d also been confident enough to fulfil its sentiment. She walked straight up to a little boy spinning around on the roundabout and introduced herself. Then she played shops and a game of tag with him and after an hour they were holding hands at the top of the slide.

A new friend was made. Before we left the boy’s mother and I did a ‘aren’t they sweet’ fake smile at each other, I should have wappled here, but I didn’t… and that was that. We headed to the shop.

My daughter and I sat next to each other on a bench sucking our lollies until the ice went white. We both turned the little plastic sleeve upside down to slurp the juice at the same time. We’re so alike.

‘Can we have a wapple again tomorrow mum?’

‘Yes, of course, we can’ I said, taking hold of her soft little hand.

My children’s ability to make new friends is inspiring. They do it with such ease, it’s organic, a natural procedure that comes as easily to them as learning to walk. What really inspires me is that they’re themselves. No airs or graces. They don’t change their character to appease their ‘wapple,’

They just say ‘hi’ and it goes from there, it blossoms.

As we grow older other factors seep into friendship making. Things get complicated and instead of just being who we are, we contort our personalities to become more appealing to other people. We don’t just ease into friendships like kids, we struggle through them.

In adult friendships there are often certain expectations, ways we have to act or roles we must fulfil. I’m usually always trying to be the funny one and sometimes even that can bear heavily upon my shoulders. I get tired of smiling and I’m starting to run out of jokes. My frivolity is not long term, But I always want to put my best foot forward, I think most of us do, it’s because, as humans, we are always searching for acceptance.

Acceptance has always played a huge role in my life. It’s why I drank to access. I was always trying to fit in, to feel part of something. My desperate need to be accepted by my peers got me in all sorts of trouble, I began drinking to please and drinking to numb out the feeling of rejection. A lose/lose scenario in the long run.

Nowadays, here I am having to find a new way of gaining acceptance. I Have to be appealing as a friend without the one thing I’d previously thought was my only merit, booze. It seems an impossible task. I mean, who wants to hang out with old boring sober pants?

Making friends and keeping them is a hard task. Doing it sober is harder.

When I stopped, I didn’t know if old friends would still like me or if new ones could handle me. I felt boring once the ethanol had drained from my bloodstream. I couldn’t imagine why anyone would want to spend time with a tea-total twerp and thought if I refused a wine at a pub, I’d be dragged out by a marauding hoard.

During my hedonistic drinking days, if a person had told me they were a non-drinker, I probably would’ve said,

‘What’s wrong with you man?’ and turned away with disgust. But luckily most people are much kinder than me.

Time was my friend. If someone had known me long enough their feelings didn’t change. Yes, some were disappointed they I wouldn’t be running amuck with them anymore, but they got over it.

Time showed my friends that I was serious, and time showed me that they were too, and we lasted. They accepted drunk me, and they accepted sober me. My true soul sisters never judged, that sipped colourful cocktails and said ‘cheers’ as they clinked their glasses against my tumbler of fizzy water. Time was enough.

Making new friends is complex. Sober friending is difficult, yet I know in the long term it will be much more rewarding. I’ve had to update my tactics, learn new ways of creating a connection.

I can’t even invite someone round for drinks, I imagine they’d rather be hanging out with people that drink, people they know and can relax with.

I know 2 years ago I would have swerved a friend that didn’t drink. Not because I didn’t like her, but because someone not drinking was far too close to the bone, too reflective of my own behaviours. Also, I didn’t trust people that didn’t neck wines, I thought they were smug and righteous and would have dobbed me in for stealing their grandmothers 29-year-old port from the cupboard under the sink. Sober people were not on my radar, I never took a moment to consider them or their reasons why.

Now I have become someone I would have avoided and, to be honest, it’s a strange place to be. It’s like living in the pause between a joke and a punchline. There is a very awkward silence in which I’m trying to be the old version of me and the person I truly am. I’m struggling to know if I can be accepted at all.

I think making new friends for me is going to be a much slower process than it used to be. People will have to get to know me over time, without wine. A slower pace of friendship will suit me now. One with no trying to impress and no showing off, I just need a ‘time will tell’ kinship, nurtured through kindness and mutual respect.

Making friends sober is another tricky part of this zig zaggy journey and even though it feels daunting, I’m slowly learning who this social version of me is, how she acts, how she fits in and what socialising actually is… without alcohol.

So, I apologise if I don’t come to parties, and I’m sorry if I don’t stay for the late-night conversations and the drunken escapades,

but I will be here with a paracetamol and a big glass of water the morning, and I’ll be here to go for a coffee and a big, long walk on the beach.

I just need some time…

And maybe the odd wapple. 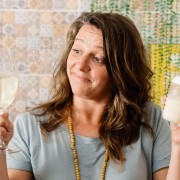 Victoria lives on the Sunshine Coast of Australia with three noisy children, a very patient husband and a confused dog. She has been writing and podcasting about her zig zaggy journey to sobriety for 2 years on Drunk Mummy Sober Mummy. She is currently writing a book about pickled parenting and how giving up alcohol made her a better mom.